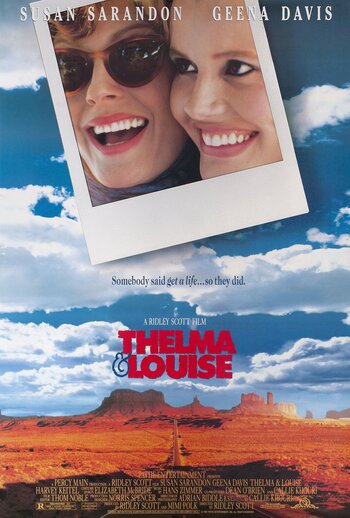 "Better not look down, if you want to keep on flying, put the hammer down, keep it full speed ahead. Better not look back, or you might just wind up crying, you can keep it moving, if you don't look down."
"You've always been crazy. This is just the first chance you've ever had to really express yourself."
— Louise Sawyer
Advertisement:

A 1991 film directed by Ridley Scott and starring Geena Davis and Susan Sarandon, Thelma & Louise became one of the most iconic films of the decade. Scott, Davis, and Sarandon all received Academy Award nominations, while screenwriter and intended director Callie Khouri grabbed the Oscar for her screenplay.

Rather than face almost certain prosecution, the duo decide to hit the road to Mexico; along the way, they are pursued by a sympathetic FBI agent named Hal Slocumb (Harvey Keitel). As they experience freedom they never had before, the long arm of the law finally corners them at the top of Grand Canyon. In one of the most iconic—and infamous—endings in cinema history, instead of surrendering, the two decide to... well... If you read the lyrics below the image, you'll get it.