I Have Your Wife 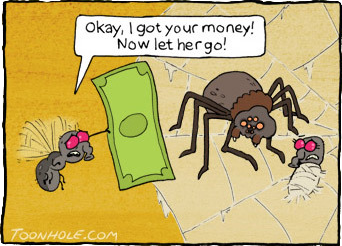 The Big Bad tries to get the hero (or someone else) to do his bidding by taking someone precious from him and essentially holding them to ransom. It's often a significant other, frequently a wife or girlfriend; but any family or friend works, or even strangers if it's a certain type of hero.

This sort of thing tends to go in the following sequence:

Hostage for MacGuffin is a subtrope for when the trope occurs with a MacGuffin. If the villain is attracted to the hero, he/she may give them the Scarpia Ultimatum.

A common variant used with lone heroes (in which case 6 on the list is not exactly an option) has the hero reluctantly doing what the villain orders him to do, only to be screwed over when the villain reneges on his promise to let the loved one go, usually before killing the loved one in question in a nasty Kick the Dog moment. The result, for many action heroes, is often a Roaring Rampage of Revenge that usually culminates in Storming the Castle and handing the villain the mother of all asskickings for daring to mess with the loved one in the first place. Alternatively, a Roaring Rampage of Rescue ending in the rescue of the loved one may also take place.

Sometimes, a villain will do this as a plot to get a hero to betray his friends, only to have him Rewarded as a Traitor Deserves. It's also a great way to turn a member of the good guys into Regretful Traitor.

Can't blame many a hero for taking precautions against this.

Sometimes, of course, the intended target may feel that You Can Keep Her!, in which case the whole thing is moot by Threat Backfire.

If this is the reason why the villain is doing it, then it's a case of The Commies Made Me Do It.

In the real world, a kidnapping committed for the purpose of coercing another person to commit a crime on the original criminal's behalf is called a tiger kidnapping.

Most real-life kidnappings, tiger or not, tend to end peacefully, whether or not the victim sees the kidnapper's face. This is largely due to pragmatism, as murder is a far more serious offense than kidnapping. Media usually ignores this because of the Rule of Drama, acting like the victim will be killed the second the ransom is paid.

Alice has been kidnapped

It is revealed that Alice was kidnapped by Ben Mott, holding her hostage in exchange for the rest of the manuscript.

Alternative Title(s): I Have Got Your Wife, I Have Your Daughter

Alice has been kidnapped

It is revealed that Alice was kidnapped by Ben Mott, holding her hostage in exchange for the rest of the manuscript.