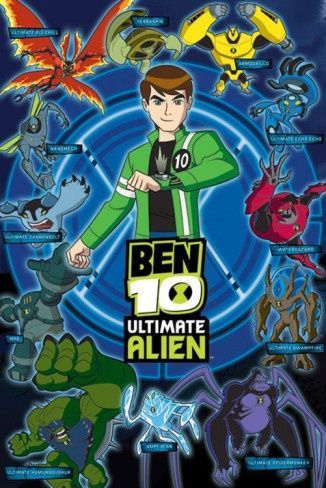 Ben 10: Ultimate Alien is the third series in the Ben 10 franchise, following Alien Force; it was originally titled Ben 10: Evolution in pre-production. The series was launched April 23, 2010.

The main difference between this and Ben 10: Alien Force is that Ben now uses the Ultimatrix, a prototype modified version of the Omnitrix with the ability to turn his aliens into stronger versions of themselves. Additionally, Ben's Secret Identity is revealed to the world, resulting in him becoming a worldwide celebrity, loved by the kids but distrusted by adults.

In the first season, the protagonists have to deal with five aliens from the Andromeda Galaxy who escaped to Earth after being kidnapped by a mysterious Osmosian (Kevin's species) criminal named Aggregor, who attempts to absorb all of them for a mysterious purpose.

The second season is mostly made of filler episodes, but there are some episodes that link into the third season's story arc involving an Eldritch Abomination named Diagon linked to the past of the Forever Knights.

Much like its predecessor, Ultimate Alien had a controversial reception and maintained the Broken Base amongst the fans. It was generally viewed as too similar to Alien Force to even be considered as a separate series, and it is usually rather seen as a continuation of the previous one; the only major changes it brought to the franchise were Ben starting to use a new Omnitrix and his identity being revealed to the world, confirming further his evolution as a Living Legend in-universe. It was still notable, however, for two major Author's Saving Throws: giving an explanation for Kevin's change of personality between the original series and Alien Force, and turning back the badly decayed Vilgax and Forever Knights into credible threats. It also had a rather well-received Crossover episode with other Man of Action Studios series Generator Rex, Ben 10/Generator Rex: Heroes United.

The series generally had lower ratings than both the Original Series and Alien Force. As a result, it ended after three seasons and was followed by Ben 10: Omniverse, which went for drastic changes and attempted to go back to the original series' roots.

open/close all folders
A-F
G-L
M-R
S-Y
[Verb] This!: In “Inspector 13 “, the said Inspector has neutralized Kevin and Gwen’s powers and is about to use them as guinea pigs. Fortunately, Ben has got his own powers back, after spending one entire episode unable to transforn.

Inspector: You, highbreed Anodyte. You’ll be studied to enhance our defense systems. You, highbreed Osmosian, will be purposed to generate raw materials for Techadon forges.Deploy…
Four Arms: Deploy THIS! (punches him)

As Lodestar, Ben can create and controll powerfull magnetic forces.

As Lodestar, Ben can create and controll powerfull magnetic forces.