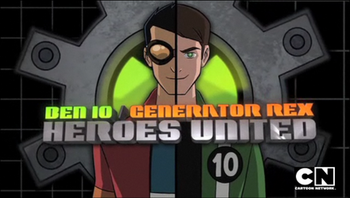 An Intercontinuity Crossover (the second one on Cartoon Network) between the two Man of Action Studios series Ben 10: Ultimate Alien and Generator Rex that aired November 25, 2011.
Advertisement:

A mysterious rift begins to open in the skies of Manhattan. Meanwhile, Rex is sparring against Agent Six while musing about his need for a "theme song," they are interrupted and sent to close the rift. Providence appears on the scene to stop the rift, but are unable to do anything before Rex arrives with Six and Bobo. Doctor Holiday then gets a scan that shows something is coming through the rift, and Rex finds himself (unknowingly) fighting against, Ben Tennyson, in the form of Humungousaur. During their skirmish, a strange metallic creature also appears and heads into the city, with Bobo and Six on its trail. Ben is finally defeated by Rex, when trying to protect bystanders, revealing his true human form. Then, Six appears with the creature, which self-destructs and renders him comatose, leaving Rex horrified and angry at Ben.

At Rex's hideout, Ben is locked up in a containment unit, while Doctor Holiday explains that the creature was Nanite in origin, but somehow completely different from an E.V.O. Ben offers help but is denied, escaping into the night. They are both confronted by Caesar, who explains he created the creature, whose name is "Alpha". He created Alpha as a means of manufacturing nanites that could adapt for any scientific need, but it became unstable as it developed sentience, forcing Caesar to banish it to another dimension. Alpha invades to absorb E.V.O.'s for their nanites, hoping to gain control of Rex's as it knows he holds the key to it obtaining perfection.

Will Rex and Ben be able to stop Alpha before they kill each other?

This special is Canon to both, and even introduced a new alien for Ben, Shocksquatch, that was then used in the new series Ben 10: Omniverse. It was generally well-received by fans of both series, and has hit the top 100 on iTunes.

While the special ended on a potential Sequel Hook, it was ultimately never followed up on. However, another crossover between the two shows — this time set in the Ben 10 (2016) universe — aired in 2021.

As this special was semi-livetroped, unmarked spoilers abound.

Tropes in the cross-over: