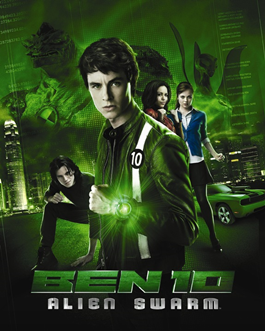 Ben 10: Alien Swarm is a 2009 Live-Action Adaptation film in the Ben 10 franchise, this one based off the Alien Force series. It is the second live action film in the series and the third movie overall.

Ben, Gwen and Kevin do a sting operation on black market sellers trying to give away alien tech. In the midst of it, the tech, supposedly latent alien chips, spring to life and attack them. The group manages to fight then off while the process coming across a girl named Elena, an old friend of Ben and Gwen and daughter of a former Plumber who went rogue. She comes asking for their help though the group is wary to trust her. As the three investigate further into the chips, its revealed there's more to the plot that meets the eye.

Unlike Race Against Time, this film was canon in the TV show and was even continued in two Sequel Episodes in Ultimate Alien: "Revenge of the Swarm" and "The Perfect Girlfriend".

The film has the following examples: