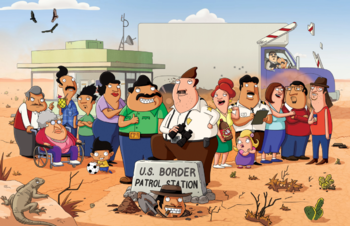 Bordertown was a short-lived 2016 American animated sitcom created by former Family Guy writer Mark Hentemann (who also created the equally short-lived MTV animated series 3 South, which explains why the character designs of the people on Bordertown are similarnote Becky looks a lot like, and may even be, a student who appeared in episode 3, and the episode "High School Football" has a redneck who looks like Ed Bickle) with Seth MacFarlane as co-producer. The show is about two families living in a Southwest desert town on the United States–Mexico border called Mexifornia. The show revolves around Bud Buckwald, a border patrol agent, and Ernesto Gonzalez, Bud's Mexican neighbor who runs a successful landscaping business.

Debuting on January 3, 2016, it constantly struggled in the ratings. FOX officially said "adios" to Bordertown on May 12.