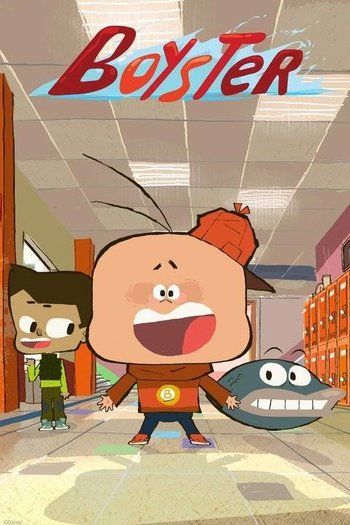 "This is the story of a genetically altered oyster who was adopted by his human family along with his shell brother. Now, he must hide his oyster powers. He is 'snot' your average boy, he is BOYSTER!"
—Opening Narration
Advertisement:

Boyster (Molusco in French) is a 2014 French animated series produced by the French animation studio Je Suis Bien Content that aired on Disney XD and France 4 for 52 episodes.

The series follows the Slice of Life adventures of Boyster Likowski, a half-human, half-oyster mutant who lives with his adopted human parents and his little brother Shelby (a normal talking oyster). Going on adventures with Shelby and his best friend Rafik, Boyster must hide his oyster DNA from the rest of the world in order to live a normal life, but often uses his powers to solve daily challenges, most of which he starts.