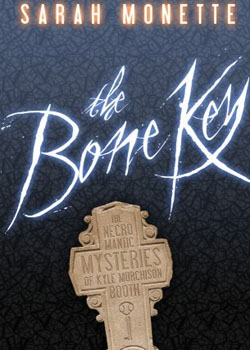 I wonder if it's a horror story?
The graves lay silently before me. The sleepers within the quiet earth did not rise up to speak to me, and I was grateful. This was my family now, and they made no demands I could not meet.
The Bone Key
Advertisement:

, and what do you get? A series of short stories chronicling the necromantic mysteries of one Kyle Murchison Booth. Taking place in an ambiguous between the wars setting in an equally ambiguous American city, this series by Sarah Monette follows the adventures of Booth (just Booth. No one calls him Kyle), as he relates his supernatural mishaps in anxious first person. Read along and watch the world fall apart all around him.

The series of shorts are all collected in The Bone Key, with the exception of the most recent five, four of which have been collected into limited run for-charity chap-book called Unnatural Creatures. The author has said that she intends to release another, larger anthology similar to that of The Bone Key when she has written enough short stories to properly fill it.

Works not currently in a collection