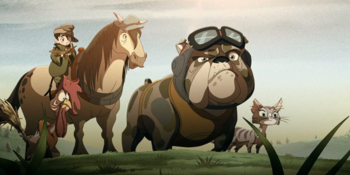 It's set in Italy circa 1944, near the end of World War II. A young boy and his family are forced to flee their home when the fights between the Germans and the Allied forces reach central Italy. Due to an air attack on the truck transporting them, the boy is separated from his parents. The shock also renders him mostly mute. He is found by a group of animals consisting of the Sicilian horse Boldsteed (Leoncavallo), the Roman cat Aurelia, a talkative Tuscan rooster named Christopher (Cristoforo), an American military bulldog named Jack, and a bee named B-17. The five animals nickname the boy Boo-Boom, after the only 2 words he can still speak, and set out to try and find his parents, only helped by a photograph that Boo-Boom still carries.

Along the way, they encounter several other problems while they navigate war torn Italy, and meet various characters like the resistance fighter Mario, a teenage street urchin named Viola, and an old teacher named Mr. Rossellini.

You can watch the trailer for the English dub here