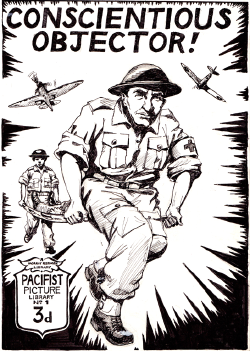 We're pacifists, not passivists.
"Ev'ryone considered him the coward of the county
He'd never stood one single time to prove the county wrong
His mama named him Tommy, the folks just called him Yellow
But something always told me they were reading Tommy wrong..."
— Kenny Rogers, "Coward of the County"

A character is passive and nonviolent, unwilling to engage in meaningless brawls. A bullying braggart sets out to harass the character. The character backs down and is branded a coward.

However, a peril soon crops up that endangers the entire community. The bully wets his Levis. The quiet character then engages in spectacular acts of heroism that stun the community. Thus endeth the Aesop.

May or may not be a Badass Pacifist. Often has a subplot of Single Woman Seeks Good Man.

If we reduce life to video game terms, this person would probably be a Stone Wall, not able to do much actively, but capable of selfless acts of defense if needed.

Compare Cowardly Lion, who believes himself a coward; the tropes may overlap but seldom do. It may, however, overlap with Beware the Nice Ones, Good Is Not Soft, and Martial Pacifist. Also compare Sheep in Sheep's Clothing, where a character who's suspected of being Too Good to Be True turns out to actually be that good and true.

Contrast Dirty Coward, for which these will be mistaken at first. Also contrast Nobody Calls Me "Chicken"!, when being labeled a coward provokes a character into doing something brave (or stupid).

Foil of Miles Gloriosus, who acts brave but is really a coward.