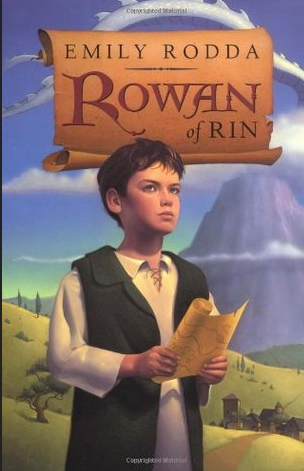 A series by Emily Rodda, author of Deltora Quest. It follows the adventures of a young boy named Rowan, who is considered quite an oddity in his village of Rin because he is small, weak and cowardly compared to the tall, strong and fearless people which live there. One day, however, the stream which runs through the village dries up, and six brave villagers set out on a quest to the Mountain to restore it. However, they have been given a map which only Rowan can read, so Rowan accompanies them, and it soon turns out that Rowan is the person the six heroes need most of all...
Advertisement:

Each book in the series focuses on Rowan as he goes on an important quest with his friends, to save his beloved village from the dangers that threatens it. Along the way, they find out quite a bit about the ancient people of the Valley of Gold, and the true history of the people of Rin. Rowan makes many new friends on his adventures and comes to be respected and almost feared by others in Rin for his exploits. In later books, characters such as Zeel (a Zebak raised as a Traveller), Perlain of Pandellis (a Maris man), Allun the baker and Shaaran and Norris of the Silk become recurring companions of Rowan during his adventures.