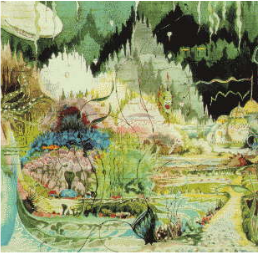 Roverandom was a book written and illustrated by J. R. R. Tolkien. It's a largely-comedic children's story about a young dog named Rover who makes the mistake of picking a fight with an ill-tempered wizard and ends up being turned into a toy. The rest of the book focuses on Rover's attempts to find the wizard so that things can be set right. Unfortunately for him, this means a massive journey into space and into the ocean depths.

Despite it being penned early in Tolkien's career, it was never actually published until 1998.This may have been because Tolkien intended this story just for his three sons. Confused? Well, young Michael Tolkien had recently lost his beloved toy dog. Wanting to comfort the boy, his father improvised a story about the toy's origins as a real dog and its further adventures once it got lost. His boys got a kick out of the yarn. The book, having accomplished its purpose, was then shelved for over 60 years.