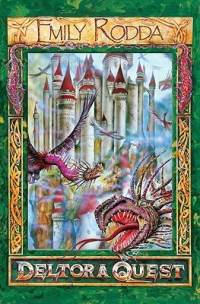 Deltora Quest is the collective title of three separate series of Fantasy novels written by Australian author Emily Rodda, with cover art and other illustrations by Marc McBride. A series written as a mix of fantasy, mystery, interactivity, horror, romance, action and adventure, it definitely has a following. Also, quite Troperiffic. The fifteen-book series chronicles the adventures of Lief, Barda and Jasmine as they fight to defend their land from the forces of evil, going on a series of quests and adventures across the country in the process.

The first series, Deltora Quest, follows our heroes as they journey to find the seven long-lost gems from the Belt of Deltora and search for the heir to the throne so that the land of Deltora can be freed from the reign of the Shadow Lord.

Deltora Quest 2, alternatively called Deltora Quest Shadowlands, further chronicles these adventurers as they journey to find the three pieces of the long-lost Pirran Pipe to rescue Deltorans held captive in the Shadowlands. Notable for making the third-person narration sympathetic to Jasmine's thoughts almost as frequently as Lief's.

In Deltora Quest 3, also known as Dragons of Deltora, our heroes must journey across Deltora to awaken the seven sleeping dragons of Deltora and destroy the Four Sisters, which are secretly poisoning the land. Notable for ramping the Nightmare Fuel Up to Eleven in its last book, where seemingly everything that can go wrong at once does.

Currently has a anime adaptation, a manga adaptation and also a game on the DS. The anime has aired around the world, on The Hub, on ABC3, and in Italy.

The anime has its own page.

There's also spinoff books with additional illustrations by McBride, such as The Deltora Book of Monsters, Tales of Deltora and Secrets of Deltora.

In 2012, a second series set in the same universe was released. This series, titled The Three Doors, shares many of the plot elements and mythologies of the first series, and directly references the past history of Deltora.

Set in the city of Weld in a land across the sea, The Three Doors follows a boy named Rye on his quest to save his city from the mysterious Enemy who has begun to attack his home.

The three books in The Three Doors are:

A third series has also being added to the continuity. This series, titled Star of Deltora, takes place about a decade after the end of ''Deltora Quest 3'' and is initially set in Del, but promises to visit other lands across the sea.

It follows the adventures of a girl named Britta as she works to prove herself as a worthy apprentice to the famous Trader Rosalyn, Mab.

The four books in Star of Deltora are:

The Rowan of Rin series has also been retroactively made a part of the same continuity.

Be warned: This series RUNS off of plot twists. There are many spoilers ahead, including some unmarked.