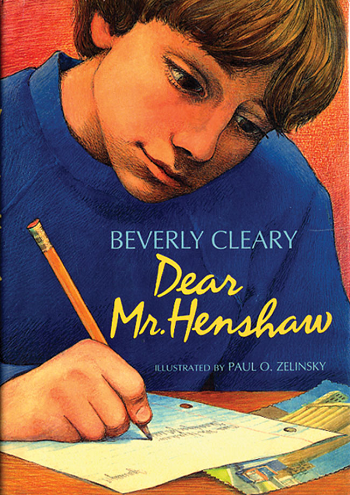 Dear Mr. Henshaw is a 1983 children's epistolary novel by Beverly Cleary, with illustrations by Paul O. Zelinsky. Winning the Newbery Medal in 1984, the novel's plot is significantly more dramatic than the Ramona Quimby series.

Leigh Botts, the novel's protagonist, is a sixth-grader who's a rabid fan of fictional children's book author Boyd Henshaw. He first sends a letter to him in the second grade, sending a few more occasionally until the sixth grade, where he gets an assignment to ask his favourite author ten questions. Naturally, he asks Mr. Henshaw, who sends back playful answers that annoy not only Leigh, but also his teacher. One good thing, however, does come out of the assignment — it encourages Leigh to keep a diary, which he addresses to "Mr. Pretend Henshaw". Thus begins the story of Leigh's parents' divorce and his struggle to come to terms with it.

A sequel, Strider was released in 1991. Consensus among reviews was that, although it was fine on its own merits, it fell short of the emotional intensity of Dear Mr. Henshaw. It has received comparatively little attention.

Tropes for Strider include: