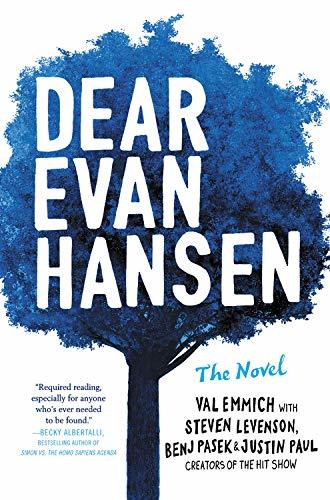 You will be found.
I have to prove why today is going to be an amazing day when all the evidence suggests otherwise. Every day that came before today was definitely not amazing, so why would I think today would be any different?
Advertisement:

Dear Evan Hansen is a novel written by Val Emmich with Steven Levenson, Benj Pasek, and Justin Paul. It is based on the 2016 musical of the same name.

Just like its predecessor, Dear Evan Hansen focuses on Evan Hansen, a high school senior who struggles with social anxiety. After the suicide of classmate Connor Murphy, a misunderstanding leads Evan to fabricate an imaginary friendship with Connor in an attempt to comfort his grieving family. The lie quickly spirals out of control; however, and Evan, who has suddenly been thrown into the spotlight and is given everything he ever wanted, has to grapple with a moral dilemma — if a horrible lie is helping people, is it really so bad?

This wiki will only list tropes that apply to the novelization and not the musical. For the original work, see Dear Evan Hansen.

The me I am is not the me that I was.