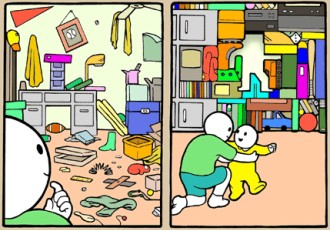 When the game shows up in your Real Life.
"One of the first formal studies of the phenomenon was at Harvard Medical School in the year 2000. Participants played the game for seven hours each, spread over the course of three days. Remarkably, 63% of the participants - almost two thirds - reported seeing imagery from the game hours after they finished playing."
— Announcement trailer

You've been playing a game for so long that you start seeing it everywhere outside the game.

The game follows you. Every time you stop playing, you feel like you still have some pending business. You're seeing passwords in your Alpha-Bits. You try to power-slide on the drive to class. Clouds are looking suspiciously like troop formations to you. You may even begin to dream about tetris blocks and playing cards. The game is the only thing you can think about, even, and especially when you should be concentrating on other things.

Don't feel bad. It's happened to the best of us. The Tetris Effect

— when a game permeates every aspect of your life. Named after the original, Tetris, which has superimposed itself on more ceiling tiles and eyelids than any other video game ever.

An amusing variant can occur if you've got two such intrusive games (or two characters in the same game — even worse if they both have good points) at once, and have to split your time between them. Once they start intermingling in your head, the result can be anything from laugh-out-loud ridiculous to seriously creepy.

There are as many examples as there are gamers — which is why this trope neither needs nor wants specific ones. If you'd like to discuss yours, might we suggest our fine forums.

This effect is likely due to the process your brain is thought to undergo when learning a new skill through repetition. In order to separate the 'noise' of non-repeating activities from the 'signal' of activities which will need to be performed frequently, and should thus be optimized for recall and performance (within procedural memory/Muscle Memory), the brain relies upon consistent manual repetition of an activity to identify the activity as a candidate for optimization (thus, 'practice makes perfect'). During this process, activity in the brain of the same sort generated by the undertaking of the activity is observable, as the brain undertakes to optimize the patterns of behaviour within the given activity. This can result in the sometimes distracting and disconcerting organization of other aspects of Real Life according to the patterns of a game skill in the process of being optimized - and thus, the specific symptoms of this phenomenon.

This trope can drive one to insanity, especially when combined with the game music also being stuck in your head.

On an interesting note, TV Tropes can have this effect, as evidenced by this page.

This is not about games that keep you playing until three in the morning, although most examples of this will be a result of that. That trope is Just One More Level!.

Not to Be Confused with the official Tetris game titled Tetris Effect, though this trope is the reason for the name.

"All those years of playing Tetris have finally paid off."

"All those years of playing Tetris have finally paid off."