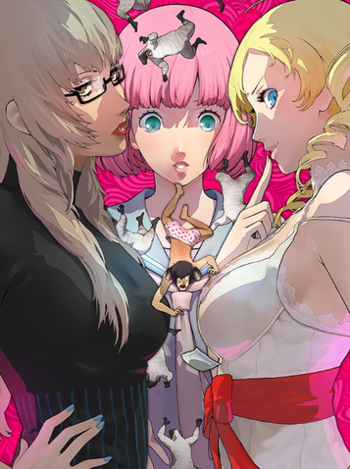 Yo.note Pictured: Katherine, Rin, and Catherine. Also sheep. And Vincent. And climbing.
Vincent: Have you ever had a dream where you... died?
Katherine: You mean, like... where you're in danger?
Vincent: No, no, where you actually die. You're being killed, or something.
Katherine: No... I usually do the killing in my dreams.
Advertisement:

Catherine is a Puzzle Game made by Atlus' Persona creative team, with animated cutscenes by Studio 4°C. It is available for PS3, Xbox 360, Xbox One via backward compatibility, and PC via Steam.

Vincent Brooks is an average 32-year old guy in a stable but unremarkable long-term relationship with a woman named Katherine McBride. When Katherine begins to press him on the prospect of marriage, Vincent freaks out at the idea... and then suddenly meets a gorgeous and carefree girl called Catherine who could be his ideal woman.

As this is happening, Vincent starts to have strange nightmares in which he is wandering in a world of endless staircases and being pursued by... something. A number of men have been found dead with a look of sheer horror on their faces, and a popular rumor states that if you fall in a nightmare and don't wake up before you hit the ground, you will die in real life. Can Vincent sort out his increasingly catastrophic love life without hurting the people around him, or will he fall victim to his supernatural stalker first?

The game is an action puzzle game in which you climb a tower by pushing, pulling and climbing blocks. Several obstacles block and hinder you along the way, including other sheep and eventually boss characters.

Catherine also features a multiplayer mode called "Colosseum" where two players go head-to-head in a single action stage, each trying to make the other Ring Out. It's fun enough to have caught on with the Tournament Play crowd. No, seriously

The game was released on February 17, 2011 in Japan, July 26, 2011 in North America, and February 10, 2012 in Europe. As of August 4, it had managed to break Atlus' previous launch records, cementing Catherine's place as their fastest-selling title in the US, with an impressive 200,000 units sold in just one week

Has an official Novelization simply named Catherine: The Novel and a Prequel Light Novel under the title Catherine: The Mysterious Tale of Rapunzel, both released only in Japan in 2011. English Fan Translations can be found here

An Updated Re-release titled Catherine: Full Body was developed for PlayStation 4 and Play Station Vita and released in Japan on February 14, 2019. The PS4 version was released in the West on September 3, 2019. It was brought to the Nintendo Switch on July 7, 2020. It adds a new character named "Rin" (short for, somewhat unsurprisingly, Qatherine), over 20 new animated Cutscenes, new sidequests, new Fanservice, new endings, over 500 total puzzle stages, a story mode difficulty, new toggleable gameplay mechanics, and a new Player Versus Player online mode. Paid DLCs (pre-installed on the Switch version) add 9 additional voice actress options for Catherine, the Horn-Rimmed Glasses, 8 playable characters for the Babel and Colosseum modesnote Catherine, Katherine, Rin, Jonny, Orlando, Toby, Erica and Boss and Joker from Persona 5 for the same modes, with special commentary from the Phantom Thieves of Hearts.

Notable on This Very Wiki for spawning its own Wild Mass Guessing page before it even got a works page.

The tropes have appeared. They're the killers. Do not die.

NOT helping that this dude is totally drunk as a skunk too!

NOT helping that this dude is totally drunk as a skunk too!