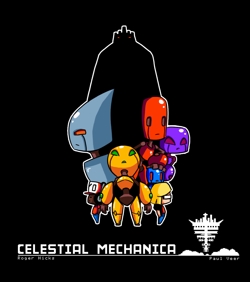 After years of wars and strife, the Earth is on the verge of collapsing. Before it completely breaks down, however, a mysteryous race of robotic beings descends from the sky and manages to save mankind. They then retreat in a floating fortress, never to be seen again.Until about 100 years later, when an unnamed female Mechanian falls down on Earth. With the help of another metal-clad robot she meets down there, she starts searching for a way to make it back to her home.

Celestial Mechanica is a short PC Platform Game with some puzzle and Metroidvania features thrown in for good measure. It was created by Roger Hicks and Paul Veer, and was released in 2011 through Desura: it has since been made freeware and can be downloaded here