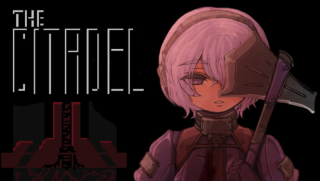 Go forth, Martyr;
For you are the finest among the Battlesisters;
Go forth, and

The Citadel is an anime-styled First-Person Shooter game for Windows developed by doekuramori and published by Top Hat Studios. It is genre throwback game that was largely inspired by 1980's anime, classic first-person shooter games such as Marathon and Doom, the Sharp X68000 game Relics, and the works of H. R. Giger.

The story is set in a dark, dystopian cyberpunk setting as players assumes the role of the Martyr, a human who finds herself being called forth on a holy mission to "free" the seven Guardian Angels and kill the Sleeping God. This mission, however, is easier said than done as she must fight her way through a legion of rogue cyborgs and machines under the Sleeping God's influence. The game features over thirty levels that are divided between six episodes, where players can create a path of visceral carnage with fourteen weapons with their own unique secondary firing modes they can uncover, ranging from pistols, automatic rifles, a whalegun, and rocket launcher, all while managing their supply of blood, oxygen, and food. Players can also use the gold acquired from slain enemies to buy upgrades, weapons, and supplies from the merchant Tycho at the hub area or at certain levels. Similarly to the Marathon games, weapons do not have an endless magazine and must be reloaded manually, and the game features the option to toggle the ability to lean from cover and weapon jamming during gunfights.

The game was released on August 5, 2020 and is available on Steam

along with a demo of the first episode. Not the confused with the film of the same name or the 1995 Amiga game Citadel.

The Citadel features trope examples of: