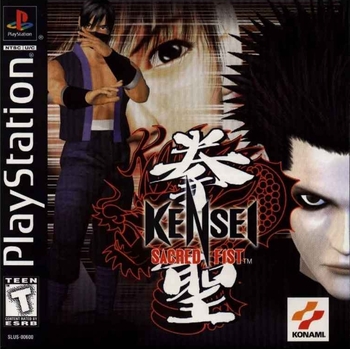 U.S. Cover
A Fighting Game developed by Konami Computer Entertainment Tokyo and published in 1998 exclusively for the PlayStation.
Advertisement:

At first glance, the combat system seems to be reminiscent of Tekken's, but it differs in that the overall pacing is much slower and less arcade-like, requiring a more methodical, strategic approach. Button Mashing won't get you nearly as far here as it will in many comparable fighters. The game sports a large, colorful variety of characters with several unique methods of attack seldom seen in standard fighting games at the time (including MMA-style ground n' pound techniques, directional chain grapples like those found in straight pro-wrestling games, and the ability to keep fighting while prone), along with highly detailed graphics and character models that are some of the better ones seen on the original PlayStation hardware.

The game is worth tracking down for serious fighting game fans.