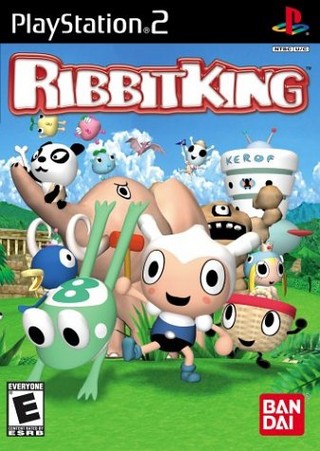 Did you Frolf today?
Advertisement:

In a nutshell, you play an unlikely young carpenter who just so happens to be the only carpenter as such on his planet and uses this skill to wield a hammer to play an interplanetary tournament involving the whimsical sport of Frolf—alongside a sentient picnic basket—as his planet faces danger due to a falling power supply. Yeah, it's that sort of game.

The brainchild of Tokyo-based character artist and illustrator Yosuke Kihara (born 1958), Ribbit King is an obscure 2003 sports video game developed by JamsWorks and published by Bandai. Initially released on 11 July 2003 in Japan for the Nintendo GameCube (titled Kero Kero King DX), a slightly expanded PlayStation 2 version followed a few months later on 18 December 2003 (titled Kero Kero King Super DX). In 2004, under the international title of Ribbit King, the game was released overseas, starting with North America on 8 and 15 June 2004 for the GameCube and PlayStation 2, respectively, before reaching the PAL region on 3 September 2004 for both platforms.

The game involves the sport of golf stripped to its bare minimum, but with a twist; the balls are now frogs sitting atop a catapult that are launched with the strike of a hammer—which replace golf clubs—in a sport now called Frolf (that capital F is mandatory), or Kerof in the Japanese version. While getting your frog in the water-hole in one turn garners you a 1,500-point 'Frog-in-One', there are other things to watch out for, and it's not just the hazards in traditional golf such as bunkers or wind speed/direction (which is optional); there are also other obstacles and hazards that are vital for a higher overall score, such as flies, point bubbles, whirlpools, swimming in water, items scattered across the course, etc., and those that aren't so vital, such as going off-course or hitting a solid object such as a tree. So don't be tempted for a second to think it is as simple as as 'get your frog into the hole first and Bob's your uncle'. The character designs, while rather simplistic, are distinct in a way that you can tell them apart from each other. Each character has their own frog modelled after themselves (with the exception of the protagonist, who has a generic green frog).

In the story mode, you are Scooter, a lowly young carpenter and resident of planet Hippitron. He is summoned by his king (who is not the titular Ribbit King, mind you) who wants to tell him that there is a problem. The king however, not being the most competent of his type around, can't seem to tell him without breaking down and bawling, so one of his servants calmly tell young Scooter the bad news; their supply of Super Ribbinite, the planet's life-blood, is "dropping faster than a lead balloon". In order to get it back up to condition, Scooter, along with his trusty sentient picnic wicker-basket companion, Picwick, travels the galaxy across five planets—Ribbetopia, Lavatron, Techtron, Frosticle and Hypnotron—on a mission to play the Frolf Tournament to become the Frolf Champion, or Ribbit King, win the Super Ribbinite and return back home. Along the way, he and Picwick meet Sluggy, the manager and 'referee', who mans the Frolf Utility Vehicle (or F.U.V. for short). After this storyline is completed, a second storyline with a different framing device and harder enemies becomes playable.

If you're not bothered about the story (which is single-player-only), you can play the Vs. mode which ranges from 1–4 players, though you have to play through the story mode in order to have a full set of characters.

While this game is a very obvious example of a WJT, how good it actually is depends on the person; critical reaction generally passes it off as mediocre, while consumers view it in a more positive light, either doing so because of its cheesiness or genuinely finding it a pretty good, if not underrated title.

One notable feature of the game is its inclusion of a free bonus disc: Ribbit King Plus! It contains 27 short computer-generated animations, running under a minute in length, of the characters from the game and a montage of the story mode cutscenes set to the title theme that are unlocked throughout the course of the game. These were originally broadcast on the TV Tokyo children's early-morning weekday variety show Oha Suta: The Super Kids' Station over a period of six weeks from 16 June – 25 July 2003 to promote the game in the lead-up and aftermath of the game's original Japanese GCN release and were included on a bonus DVD with the Japanese PS2 release.

While this rather odd send-up of pretty much any and/or every golf video game is a rather unique concept to everyone else in the world, to Japanese gamers this is nothing new; Ribbit King is the successor to—and not a port of, contrary to some sources—Kihara's earlier and even more obscure Japan-only PlayStation game Kero Kero King, published by Media Factory and released on 2 November 2000. This game, while very similar to the aforementioned game gameplay-wise, has a different story and characters from its successor (though some of them look quite similar to characters from the later game, presumably due to Kihara's artstyle). This game also supported the PocketStation, though what its purpose was is currently unknown in the Western world at this point due to the game's obscurity and aforementioned Japan-only release.

These games includes examples of: