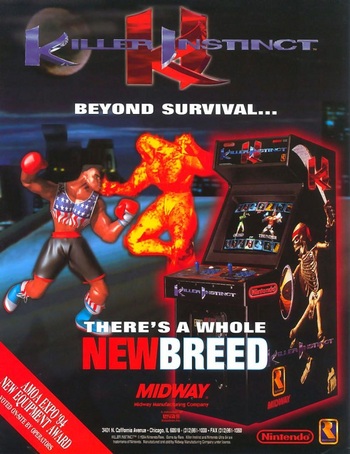 C-C-C-C-COMBO BREAKER!
"Available for your home in 1995, only on Nintendo Ultra 64..."
— The Attract Mode for the first Killer Instinct. They never fulfilled that promise. note Well, not completely true. The first game did see a very good port on the SNES and Game Boy, and KI Gold eventually did make it to the Nintendo (Not-So-Ultra-Anymore) 64 in 1996. But that was a port of the second game.
Advertisement:

The year was 1994. Nintendo were feeling the gaming equivalent of the Animation Age Ghetto. They got a lot of grief for censoring the blood and Fatalities in their otherwise-excellent port of Mortal Kombat. It was The '90s, so what else was there to do but launch a new IP which would make Mortal Kombat look tame (even hiring Midway Games to co-develop it with Rare)? Nintendo even broke their own long-established rules like allowing a player to control the undead, or putting the word "Killer" in the game.

Killer Instinct is a series of fighting games developed by Rare originally for Nintendo systems, then developed by Double Helix Games and later Iron Galaxy Studios for Microsoft's Xbox One and PC. The series comprises the following games:

Set in a dystopic future Earth, the plot revolves around the eponymous Killer Instinct tournament held by the hugely-evil UltraTech corporation for reasons that are unclear, though the comic implies it's for the huge revenue from bloodthirsty spectators. Among the competitors are people who have been wronged by UltraTech, most notably the Corporate Samurai and fanservice character Orchid, and a few of the company's whacked-out test subjects such as the Mascot Mook Fulgore.

KI-style combos are great for beginners who are inexperienced at fighting games. ("C-C-C-C-COMBO BREAKER" and "ULLLLLTRAAAAAA COMBO" seem to be running gags associated with the series.) You don't have to expertly string moves together to keep your opponent in a stunlock state to rack up big damage. Instead, combos in Killer Instinct are very formulaic and easy, following a strict process of opening with a special move (called Openers by the community), linking together auto-doublesnote If you crave a little more technique, you can use Manual hits instead, which are more difficult to break and more special moves, before finally ending in a finisher that shaves off a ton of health. However, the combo system has an out for players who are observant enough to know how their opponent is trying to combo them. A "Combo Breaker" occurs if the opponent is keen enough to know what works in a Rock/Paper/Scissors situation by pressing the two light, medium or heavy buttons corresponding to what type of autodouble is being performed. This forces players to be keenly aware of what buttons their opponent is pressing even mid combo, and keeps things interesting and engaging the entire match.

The first proved popular due to its eye-popping graphics (courtesy of Silicon Graphics, who did the pre-rendered sprites for Donkey Kong Country), catchy soundtrack, and signature combo-intensive gameplay. A sequel called Killer Instinct 2 was later released, but wasn't nearly as popular for several reasons: getting rid of the pre-rendered backgrounds in favor of real time polygonal backgrounds, the revamping of several characters, a confusing time-travel plot, and the rise of 3D Fighting Games. An updated version, titled Killer Instinct Gold, was released for the Nintendo 64 a couple months after launch. The series still had a fanbase, however, and some still hoped for a revival done by developer Rare. However, in light of certain news

.. that is, until E3 2013 when Microsoft announced a new KI game was in the works for the Xbox One. The third game, a reboot of the series titled simply Killer Instinct again, released in 2013. It brought back many of the old characters and gameplay mechanics, but with a modern spin that helped revitalize a nearly 20-year-old franchise.

Useless trivia: the first game, though marketed as using Ultra 64 hardware, was actually a custom Indigo2 motherboard with a 100 MHz MIPS R4600 chip, Ultra graphics, and a hard drive for storing all the assets.

The game is the Trope Namer for:

The series provides examples ofnote The 2013 game's tropes can be found in its own page.: