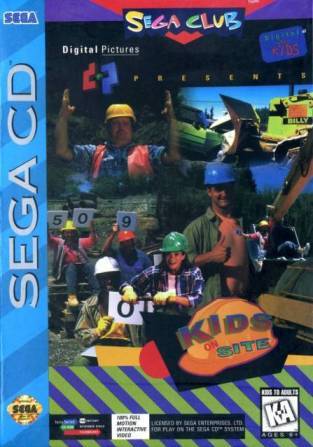 Kids on Site is a video game released on the Sega CD in 1994, published and developed by Digital Pictures. In it, you play as a child who's being told how construction machines work by three workers: Bertha, Dizzy and Nuts. There's also a group of minor characters called the Coffee Break Gang.

There's four usable machines: the excavator, the bulldozer, the steamroller and the wrecking ball. The A button will move your vehicle to the left, C to the right, and B will perform a special action. Completing certain objectives with each vehicle will reward you with a merit badge. Collect all four of them, and then you can detonate a building as a reward.

On April 1st, 2022, Screaming Villains, who handled remasters of other Digital Pictures games, announced that this game was getting a remaster, subtitled Hard Hat Edition- and despite the date, that's not a joke, as pre-orders for a limited physical run went up that day. It's set to launch digitally on Playstation 4 and Steam on June 14, 2022.