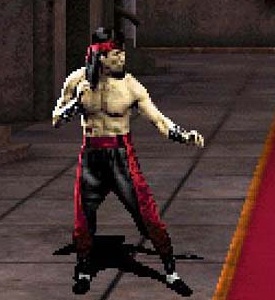 When the sprite graphics in a Video Game are made by conversion of an image created externally (such as a photograph, CGI render, hand-drawn artwork, video feed, etc.) into a sprite, as opposed to the Pixel Art methods typically associated with the creation of videogame sprites. This can actually save a lot of time and effort in the production cycle, but the results are often not as pleasing (particularly when photography is used).

This was popular in the The '90s (The 16 Bit Era Of Console Video Games) before processing power and tech prices could make Polygonal Graphics practical for home computers and video game consoles. The process could actually make more detailed graphics than many of the early polygon-capable game systems since it was taking more advanced CGI and converting it to 2D images.

Also, if a photo is used, it could be anything from Real Life pictures, to actors, to Stop Motion (e.g. Claymation models).

Compare Sprite/Polygon Mix (and can overlap if the sprites or bitmaps are also digitized). Also compare Pre-Rendered Graphics.