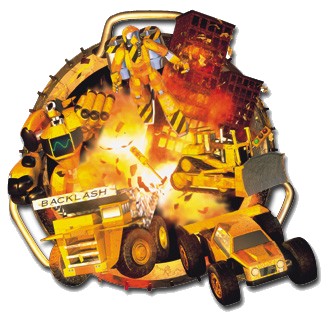 Get used to seeing that vehicle marked "Backlash" on the bottom-left.
"Time to get movin'!"
Advertisement:

A big truck is hauling two defective nuclear warheads to a safe location. The warheads started to leak, however, so the truck has been set on an automated, direct course to its destination. The Blast Corps has been called in to clear the way for it, because if this truck hits anything, the warheads will go off and start a nuclear winter.

So you, a pilot of the Blast Corps, have to do the destroying. You have various vehicles at your disposal to get the job done. So, get started before that truck destroys everything!

Blast Corps (BlastDozer in Japan) was released for the Nintendo 64 by Rare in 1997. It was later included as one of the 30 featured games of Rare Replay for Xbox One.

"You're just trying to impress me."