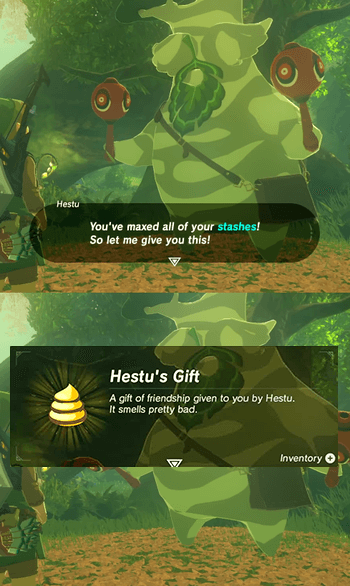 Well, they say friendship is golden…
"This certifies that you have gathered no less than ten thousand carp. Please spend your time in a manner more beneficial to society. Your achievement is noteworthy for its utter lack of meaning." With heartfelt disapproval, Gallijaux & Joulet
— Final Fantasy XI
Advertisement:

In many games, some players strive for 100% Completion. A few of these dedicated players do it simply for bragging rights. Others do it in hopes of some big fancy reward. These games reward, alright... but that reward will definitely feel like a slap in the face.

In moments like this, rather than congratulating you on completing the game in full, the game decides to instead mock you for putting so many hours into beating it 100%, either by giving you an item or a wearable that only serves as a symbol of humiliation, or by outright telling you to get a life.

Not all of these examples need to complete the whole game itself. Sometimes, the mockery comes from taking the time to completing a needlessly-long Sidequest.

Compare Achievement Mockery, for achievements in games that serve as signs of humiliation, and Do Well, But Not Perfect, for moments that require you not to strive for perfect completion. Compare Earn Your Bad Ending, when the result of extra effort is a bad ending. Not to be confused with Easy-Mode Mockery, which is when the game makes fun of you for playing on the easiest difficulty. Related to A Winner Is You, when you receive a simple "congratulations" as reward and that's all.

Due to the nature of this trope, spoilers will not be marked.