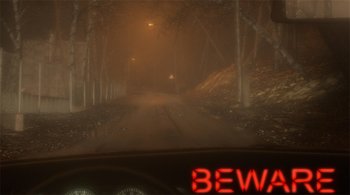 Beware is a Survival Horror Driving Game by Ondrej Svadlena, currently only available as a demo. Despite being extremely bare bones, its unique atmosphere and intense chase scenes have immediately awarded it a huge cult following.
Advertisement:

The player is driving through the desolate country in the middle of the night, where they're harassed and hunted by fellow drivers.