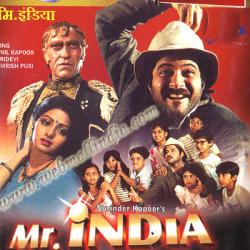 A film directed by the guy who would later make Elizabeth. The film is an homage/spoof of the Bond movie formula and also one of the rare Bollywood superhero movies. Perhaps most famous for the Big Bad Mogambo, second only to Gabbar Singh in cinema infamy among Indians, and played by Amrish Puri (Mola Ram to Indiana Jones fans). The titular character of Mr. India is played by Anil Kapoor ad his love interest is Sridevi.