Closer Than They Appear 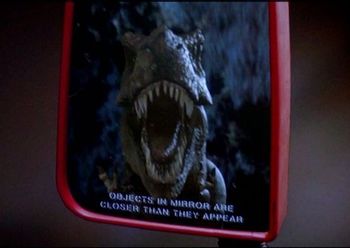 Rear-view mirrors sometimes come with a warning: "Objects in mirror are closer than they appear."note These mirrors are convex, so they provide a wider field of view at the price of making the images of objects smaller, and therefore apparently farther away. This is not reassuring to the character who looks into the rear-view mirror and sees a Tyrannosaurus rex running after his car. Especially if said T. rex appears to be disturbingly close as it is.

Truth in Television in some countries! Except for the T. rex part. For now...

Compare Danger Takes a Backseat. For a more metaphorical use of rear-view mirrors, see Past in the Rear-View Mirror.