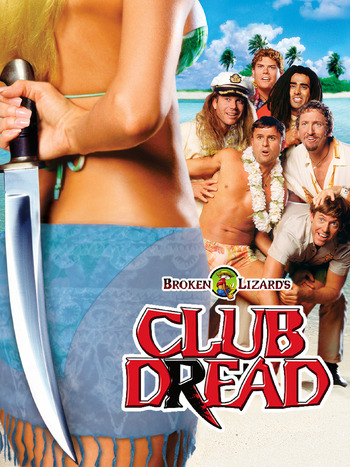 Start with a trip; it could be for work, play, study or research. Add a traveler, maybe a couple or a group of friends, or for extra trope points a group of friends who are couples. They're traveling far from home to someplace remote and rural, a foreign country, or both for quadruple trope points. So now they're someplace new and exciting and different... where they will be off guard; no one knows them or will notice if they disappear; they have trouble communicating with the locals or there are no locals with whom to invoke Safety in Muggles; and there will be no help from home if they get stranded, robbed, kidnapped or killed. And so they are.

Cue the Closed Circle trapping them and keeping help away, once the trap is sprung any of a hundred Dramatic and Horrific developments can pounce on these unwary tourists. Maybe that nice stranger is actually part of a terrorist group and implicates the tourists. Or they're marked as easy targets for exploitation and have their stuff stolen, get kidnapped, or sold into slavery. Maybe there's a monster in the cave they're exploring that starts to pick them off one by one, or there's mutant zombie hillbilly cannibals in the foothills waiting to eat them. Point is, they're a long way from home, and because they don't know the area or aren't as cautious as they should be, it leads to some horrible things happening.

The use of this trope in horror and drama is particularly scary because it's Truth in Television (well, minus the mutant zombie hillbilly cannibals. We hope). Criminals in other countries look for tourists in particular as they tend to have a lot of spending money, poor language skills, and no local ties who may get worried if they go missing.

This sort of thing can happen on a Vacation Episode and in Don't Go in the Woods, and when a space ship answers a Distress Call or people simply take a Wrong Turn at Albuquerque. This is one of the reasons why Short Cuts Make Long Delays. Also comparable with Hell Hotel. If the danger the vacationers get into is similar to their "day job", this scenario can be a form of Busman's Holiday.