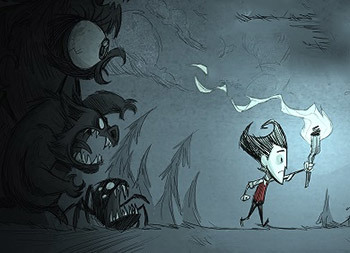 "My torch just went out!"note No, it didn't.
The entry is simply: "Lights out. God help me."
— The Haunter of the Dark by H. P. Lovecraft
Advertisement:

If someone enters a dark space in any horror media (though action films also use the trope), you know something's going to happen, and it's not likely to be good. Something's going to snatch someone, burst into the room, be lit dramatically by a sudden flash of lightning, and/or bull rush the heroes.

Happens especially in rooms where there are dangly things to hide the villain. Foreboding Architecture and evil being poorly lit tend to compound the problem. Bonus points if a storm causes the aforementioned lightning flashes. More bonus points if it's the attacker who set up the dark room in the first place.

In real life, associating darkness with impending doom is just one of the many evolutionary survival techniques that makes us fear the dark: many predators that could take down humans are nocturnal hunters, and humans have poor night vision in comparison.

Daylight Horror is an inversion of this trope. Not a Subversion. Not to be confused with Dark Is Evil, although it can invoke this. Often overlaps with Nice Day, Deadly Night. In Video Games, can lead to a Timed Mission if combined with a Ten-Second Flashlight or Tentative Light. Often found hand-in-hand with Nocturnal Crime, with Frequently Full Moon tagging along close behind. Related to Lights Off, Somebody Dies, although the effects in that trope tend to be more immediate.

Alternative Title(s): Eaten By A Grue