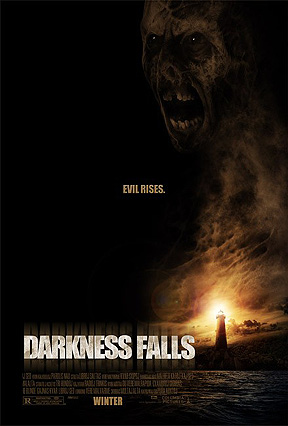 "Over 150 years ago in the town of Darkness Falls, Matilda Dixon was adored by all the children. Whenever one of the children lost a tooth, they would bring it to her for a gold coin, earning her the name, "The Tooth Fairy". One day, a fire tore through her home on nighthouse point, leaving her face horribly scarred. Matilda's burnt flesh was so sensitive to light, she could only go out at night, always wearing a porcelain mask. One day, two children didn't come home. The townspeople blamed Matilda. They hanged her. Since then, there are some who believe that Matilda still visits the children of Darkness Falls on the night they lose their last tooth, seeking her vengeance upon those who lay their eyes upon her face, fulfilling her curse, 'What I took before in kindness, I shall take forever in revenge.'"
—Opening Narration
Advertisement:

A 2003 horror movie originally inspired by The Tooth Fairy, a short film by comic book artist Joe Harris, but due to Executive Meddling, ended up being completely different from the original concept, with even the design of the monster going through several changes. It follows the story of Matilda Dixon, who was left horribly disfigured in a fire, only allowing her to go into the sunlight whilst wearing a mask. After being executed by the townsfolk, her ghost seeks out revenge, killing everyone who lays eyes on her face.

Not to be confused with When Darkness Falls, a Swedish anthology drama film by Anders Nilsson