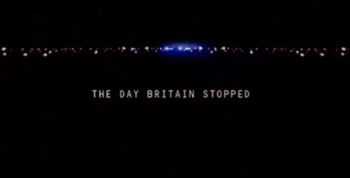 A mockumentary aired by The BBC in 2003, focusing on the possible breakdown of Britain's transport system, and how tragedy can ensue from the fallout.

The story starts from early December, when a rail strike is called by the railway union due to an accident at Waverley railway station in Edinburgh. The rest of the film focuses on how the events manifest on a particular day (19 December). The rail strike forces more cargo and people on the roads than usual, with the Christmas rush not helping matters. An accident occurs on the M25 motorway outside of London, with traffic rapidly backing up. Due to other mismanagements within the traffic and police authorities, what was supposed to be a usual annoyance for motorists results in the dominoes starting to tip, the traffic jam extending to the whole of London, and eventually grinding the whole of Britain to a halt.

The events unfold in chronological order, as presented from various people involved, including a monitoring officer for one of the motorways, several people stranded in the traffic jams, and a politician from the transport ministry. Drama is further added with news footage which describes the unfolding events (e.g., Sky News, Channel 4 News, France's TF1), real-life footage (from a train crash site, a speech by Prime Minister Tony Blair, and various stock footage of British traffic congestion), and several cameo roles by well-known British personalities.

Tropes used for this work: