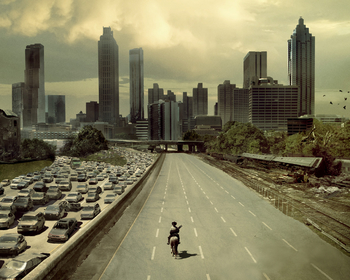 Whatever happened in the city, at least there'll be plenty of vacancies!
Along the interstate in the distance long lines of charred and rusting cars. The raw rims of the wheels sitting in a stiff gray sludge of melted rubber, in blackened rings of wire. The incinerate corpses shrunk to the size of a child and propped of the bare springs of the seats.
— Cormac McCarthy, The Road
Advertisement:

It's Just Before the End, and the destruction of the world is imminent. Whether World War III, the Zombie Apocalypse, a Flaming Meteor, an Alien Invasion or some other Earth-Shattering Kaboom, the citizens need to escape the cities, and fast! Unfortunately for humanity, the end result when so many people try to Outrun the Fireball at the same time is a Big Honking Traffic Jam.

Cut to After the End, and our ragtag heroes fortunately escaped the doom which befell most of humanity. As they wander the roads, searching for food, other survivors, and/or a better life, they stumble across a highway leading out of the city packed bumper-to-bumper with vehicles abandoned and destroyed by the late cataclysm. These cars haven't gone anywhere in years, nor are they likely to go anywhere anytime soon.

The post-apocalyptic traffic jam is a way to show the panic and chaos which occurred during the just before and during the end. People don't leave their cars willingly in unless the car has become a detriment; thus it indicates that they were fleeing, and thought they stood a better chance on foot (perhaps because of the traffic jam having slowed the speed so much that running was a speedier escape), or that the occupants tried to flee and failed, leaving the wreckage of the car (and perhaps their corpses) where they stood. An apocalyptic traffic jam could result even if the drivers of the vehicles didn't necessarily all get incapacitated at the same time: a small percentage of drivers suddenly being unable to drive will keep anyone behind them from making much progress while still in their car, and encourage them to continue on foot. Frequently, all the abandoned cars are going in only one direction, and the part of the road meant for cars going the other direction is empty. It conveys that everyone was trying to escape (or take refuge in) a specific location (but also keeps the cars from being an actual obstacle to the protagonist's travels). Often, a Ghost City is located at the tail end of the traffic jam.

Besides providing information about the late apocalypse, the post-apocalyptic traffic jam can serve as a source of food and equipment for our hero, or be a potential danger if those behind the wheel aren't really dead.

The Post-Apocalyptic Traffic Jam is a sub-trope of Abandoned Area. It could also be a form of Unexpectedly Abandoned if the hero Slept Through the Apocalypse or was Late to the Tragedy. It shares similarities with Ghost Town, Ghost City and Ghost Planet.