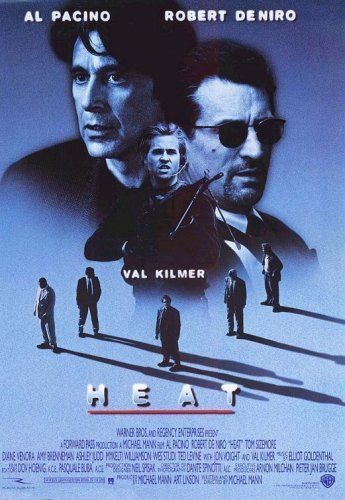 "Don't let yourself get attached to anything you are not willing to walk out on in 30 seconds flat if you feel the heat around the corner."
— Neil McCauley to Vincent Hanna
Advertisement:

Heat is the first movie billed almost entirely on featuring Al Pacino and Robert De Niro together. It's a 1995 Michael Mann film about the relationship between a cop and the criminal he's investigating. It is a loose Remake of Michael Mann's L.A. Takedown

In this movie, Pacino plays Lt. Vincent Hanna, in the LAPD's Robbery-Homicide division, who is in the pursuit of master thief Neil McCauley (De Niro). Neil lives by one rule: when you feel the heat, you walk away. Never become attached to anything you can't leave behind in 30 seconds.

Both men are masters of their professions, but struggle with their personal lives. Hanna wrestles with his family, while Neil is forced to admit (to himself rather than anyone else) he may have feelings for the woman he's been seeing. The tangles of their personal and professional lives become messier as Neil reunites his crew for one last gig, a retirement send-off.

Despite the action trappings, and having one of the most memorable and realistic shootouts in movie history, the drama of the film comes from the internal strife of the two characters. On one hand, Vincent is obsessive about his job and oblivious to his failing marriage. On the other, Neil is successful and has nearly everything he wants, but is still painfully lonely. Neither man is happy or fulfilled, and each is looking in all the wrong places to find those missing pieces.

This is the film that helped put director Michael Mann (Collateral, Miami Vice, Public Enemies) on the map.

Currently, Mann is doing a prequel novel that would narrate the main cast's early days prior to being involved in the movie. The novel is scheduled to be released in August 2022, with the possibility announced that it may get a TV/film adaptation overseen by Mann.

Not to be confused with the Burt Reynolds movie of the same name. Or with The Heat.

"Because she's got a b— GREAT ASS. And you got your tropes all the way up it!: