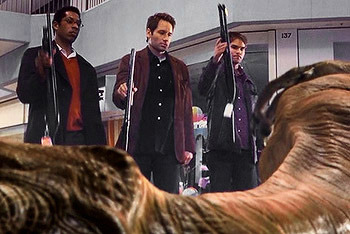 Because a two-handed pump is for chumps.
Advertisement:

Cycling a pump-action shotgun as done by the Rule of Cool. After firing, the wielder lets go of the trigger and holds the gun vertically by the forward grip in his other hand. He then jerks the gun sharply upward, letting its inertia and weight work the pump, then levels the gun and fires again. A variation involves a lever-action firearm, where the character does something similar but holds on to the lever only, letting the gun's recoil and weight cause the handle to pull itself.

Alternatively, it can be done prior to a fire fight, as part of a Lock and Load montage.

As seen in this shotgun tutorial video,

attempting this in real life is possible, but inefficient. It also puts a lot of unnecessary strain on the gun's moving parts, and it's unsafe, as a considerable amount of force is required to rack the slide. It's very possible to lose your grip and send a now-loaded firearm flying across the room. On the other hand, this can be justified if the user in question is handicapped.

There is an actual technique for cycling a pump action with one hand (only used if your other hand is incapacitated), but it entails placing the butt on the ground and cycling against it, which is far safer and more controlled. A similar technique can be used to cycle the slide of a pistol, using the edge of a table or something to press on the front of the slide while not blocking the barrel; like the one-handed shotgun pump, there's also a variant that's more common in Hollywood but also more likely to break something if you were to try it in real life (that is, catching the sights on the edge of a table).