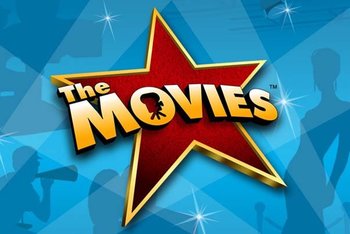 The Movies is a 2005 computer game created by game designer Peter Molyneux.
Advertisement:

The Movies puts the player in control of his own movie studio, which he must run from 1920 to the present day. Along the way, the player researches new technologies, such as sound, color and special effects. You hire actors, directors, writers and crew members, assemble sets and produce movies. As history progresses, new events change the movie going public's appetite for films: gangster movies in the 1930s, sci-fi films in the 1950s, etc. Making good movies allows you to make more movies, unlocks new sets and can even win you awards.

The real draw of The Movies is the powerful but intuitive Machinima tools. The player can create a custom script, drop actors into roles, and control their emotions and actions. When you're done shooting, you can drop the film into post-production, where you can edit the footage with a drag-and-drop interface similar to professional tools. You can add sound effects, music and dialogue (which the program lip-syncs). Then, you can export your movies to a WMV file and share it with the world.

Some criticisms of The Movies are that the simulation and tycoon elements never come together, that the simulation has too many responsibilities for the player, and that there aren't enough scenes and costumes to make varied movies. Recently, the online component has been dropped, and Lionhead will no longer be hosting movies on its Web site. Fortunately, there are plenty of fan sites where you can still upload movies, such as The Movies Underground

There is also an Expansion Pack called Stunts and Effects, which adds new special effects, scenes, costumes and sets to use in your movies. The biggest reason to get it, though, is that it allows you to control the camera angles in your movie, which greatly adds to the variety of shots you can get in your film. Sadly, said expansion pack was only released in several markets, notably the Asia-Pacific region, due to Microsoft buying out Lionhead Studios before it was released elsewhere.