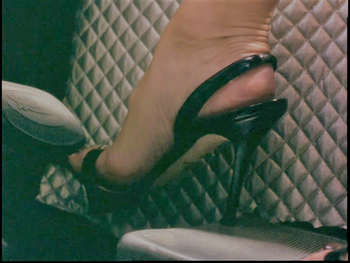 In a hurry? Just floor it, problem solved!
To heighten tension and drama in a car chase, or other bit of vehicular business, a very common shot is to show the driver aggressively stomping on the gas pedal, often until it can pressed no further. May be accompanied by dramatically and/or aggressively shifting gears. It's common shorthand to tell the audience "this car will be going really fast now," or "the characters are really serious about catching/escaping from this guy." Often used when Overdrive is needed. It's also a good indicator of whether the driver is either starting to get serious or simply Drives Like Crazy.
Advertisement:

In Real Life, flooring your accelerator is a bad idea. Most cars have accelerations and top speeds that are just unsafe for the average city driver to attempt, and flooring the pedal can easily cause loss of traction, making you go slower or lose control of the vehicle completely. Smaller increments of acceleration are safer and more effective. But a foot moving a quarter-inch at a time doesn't translate well to camera. That being said, flooring a car does significantly increase the chances of having the tires squeal and leave a cool mark on the ground once the vehicle's in motion, two more requirements for the Rule of Cool. For added effect, a brief shot of the speedometer needle moving rapidly clockwise may also appear.

Sometimes a character will put the pedal to the metal several times in the same scene, when logically they are already at maximum acceleration (and, sooner or later, maximum speed), and there's just no more power to be had.

A Sub-Trope of Rule of Cool. Can overlap with Activation Sequence if the driver is just beginning to head out on the road.