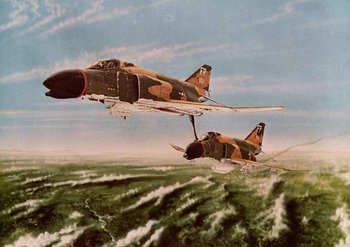 A pilot's aircraft (or space craft) has been damaged, and has lost an engine, or is leaking fuel, but is still airworthy. Due to the damage, he won't be able to make it back to friendly territory, and may be forced to eject and become Trapped Behind Enemy Lines. That is, of course, unless the Ace Pilot is able to help him get out of enemy territory somehow. But how?

If he is crazy awesome enough, he might just push the other guy to give him a boost.

Because Reality Is Unrealistic, the Trope Namer is the Real Life Pardo's Push,

with Alliterative Name to boot.

Not to be confused with a Tractor Beam. If you end up with an Ass Shove, then you have done something horribly wrong.