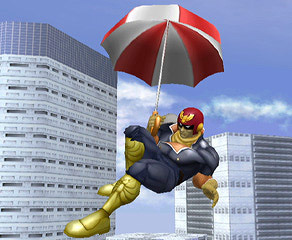 Don't laugh, or he'll beat you up with it.
"The sun shines on this Parasol of mine. Where I walk, enemies balk, and I float gently down..."
— Description of the Parasol ability, Kirby: Nightmare in Dream Land.
Advertisement:

A Sub-Trope of Improvised Parachute and Puny Parachute, in many cartoons and video games, an umbrella or parasol can be used as an improvised parachute, allowing someone who opens it in midair to float safely down to the ground.

Of course, the umbrella or parasol may fail, turning inside-out and sending the unfortunate user plummeting to the earth below. Don't Try This at Home, especially not off the roof.

MythBusters tested this, alongside other forms of hindering falling: surprise, surprise, it didn't work. Real parachutes have vent-holes in the top to help keep it stable, but that would defeat the purpose of an umbrella in the first place. Theoretically, it is still better than nothing since it makes you fall feet-first, so the main impact won't be on your head.