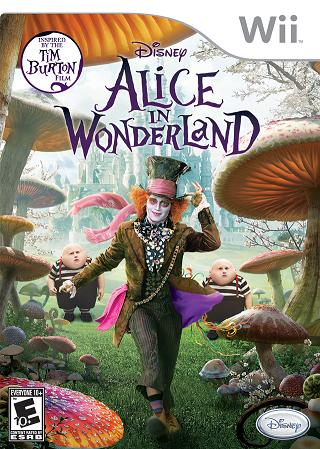 Following the smash success of Tim Burton's 2010 movie, Disney Interactive Studios rushed to release Alice in Wonderland for the Wii, Microsoft Windows, and Nintendo DS. The game, developed by Étranges Libellules, loosely follows the plot of the movie as the player takes on the roles of five Underlandian residents — the White Rabbit, the Dormouse, the March Hare, the Cheshire Cat, and the Mad Hatter — and battles the forces of the Red Queen while helping Alice achieve her destiny as the savior of Underland. The game is part RPG, part puzzle solving, and part action. The PC and Wii versions are essentially the same game, while the DS game has a number of differences.
Advertisement:

The console version of the game provides examples of the following:

The DS version provides examples of the following: