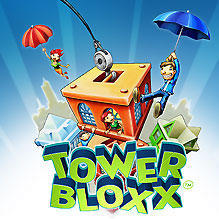 Tower Bloxx is a video game by Digital Chocolate for Adobe Flash and mobile phones running Java released in 2005. An expanded version called Tower Bloxx Deluxe was released for computers running Windows and Xbox LIVE Arcade in 2009. The game centers around city management. You select the tower you want to build (most of them require low-level towers neighboring them), then click on time to make the crane drop blocks and build the tower. As the city expands, more people populate it, unlocking new towers and the ability to place special roofs that bring in even more population if you do well enough.