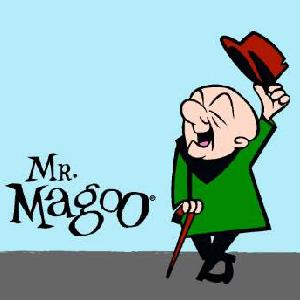 Quincy Magoo, a nearsighted old gentleman voiced by character actor Jim Backus, created in the waning years of The Golden Age of Animation, is the most popular character created by the UPA animation studio. Most of the humor in Mr. Magoo's cartoons came from his visual handicap and his staunch refusal to acknowledge it. Aside from his theatrical shorts and assorted TV specials, Mr. Magoo has appeared in:

Magoo and his nephew Waldo also appeared on a 1957 LP, Magoo in Hi-Fi.

Mr. Magoo in all his varied incarnations provides examples of: