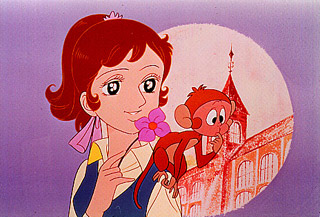 Mahou no Mako-chan (officially titled Maco the Mermaid by Toei in English) is an early Magical Girl Anime loosely based on The Little Mermaid, created by Toei Animation's planning team and veteran screenwriter Masaki Tsuji.

Mako is a young mermaid who one day rescues a handsome young man named Akira from drowning in a shipwreck and promptly falls in love with him. In order to be with her beloved, she convinces the Witch of the Sea to turn her into a human, becoming Ordinary High-School Student Mako Urashima.

The rest of the series follows Mako in her new life on dry land as she makes friends, learns about the human world, and solves problems with the help of her magical pendant given to her by her Overprotective Dad, Ryuu-oh the King of the Sea.

Made in 1970-71, Mahou no Mako-chan was the third entry in Toei's "majokko" series and the first to not be based on an existing manga. Along with contemporaries Attack No. 1 and Nozomi in the Sun, it's also one of the first anime made to appeal specifically to teenage girls, specifically viewers of Sally the Witch and Himitsu no Akko-chan who were maturing into adolescence. It suffered from mediocre ratings and is now considered one of the more obscure entries in the magical girl canon, but still has a devoted fan base - particularly in Europe and Latin America, thanks to its Italian, Spanish, and French dubs - who consider it a classic.