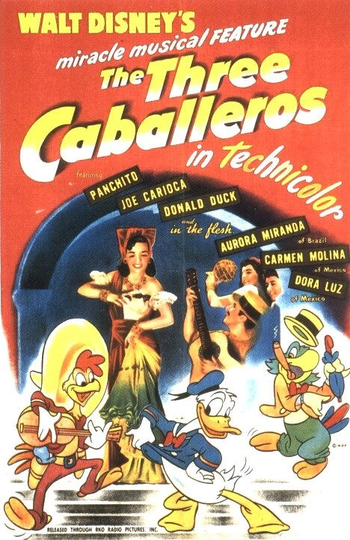 "We're three Caballeros, three gay Caballeros,
They say we are birds of a feather!
We're happy amigos, no matter where he goes,
The one, two, and three goes, we're always together!"
Advertisement:

The film is an Animated Anthology, although the segments aren't as divided as they are in Saludos Amigos, and flow together with one plotline of Donald having received gifts for his birthday:

The trio would later appear in two stories written by Don Rosa as well as a slew of appearances in the Brazilian comics, a few episodes of House of Mouse and a dark ride at Epcot's Mexico Pavilion, as well as a series called Legend of the Three Caballeros, a third Latin American film that would have introduced a fourth, Cuban Caballero was planned, but never produced. They were also featured in DuckTales (2017).

Not to be confused with ¡Three Amigos! (which actually had "The Three Caballeros" as its working title).

Donald Duck tries to blow into his thumb to make himself bigger, but instead he inflates into various balloon shapes.

Donald Duck tries to blow into his thumb to make himself bigger, but instead he inflates into various balloon shapes.