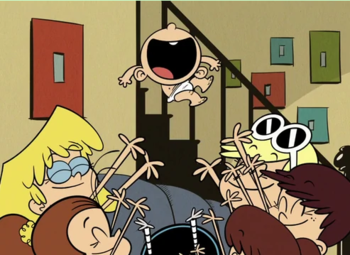 Don't Try This at Home with a baby, kids.
Advertisement:

So you are thinking of a way to honor your best friend for saving that kitten the other day. What do you do? Toss them into the air!

Celebratory Body Tossing is a tradition that nobody knows when it started, but it is associated with celebration. Usually, this trope comes into play when somebody does something considered heroic. People notice and then get the urge to lift them toss them into the air, sometimes with a blanket or trampoline. Sounds like a perfect way to get a party started right?

However, this hasn't always been the case. In Europe, tossing somebody in the air with a blanket was once considered a Cool and Unusual Punishment, as shown in Don Quixote. The punishment aspect of body tossing, however, decreased in recent years with the rise of thrill seeking.

Truth in Television, as demonstrated with the Northern Alaskan tradition of Nalukataq