Western Animation / The Many Adventures of Winnie the Pooh 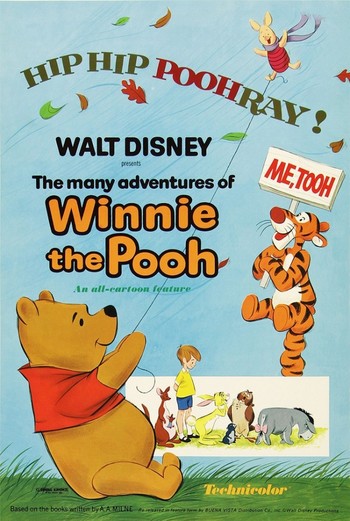 "Now, Pooh had some very unusual adventures, and they all happened right here in the Hundred-Acre Wood."
Tigger: Say, who are you?
Narrator: I'm the narrator.
Tigger: Oh, well, please, for goodness' sakes, narrate me down from here.
Advertisement:

Entry #22 in the Disney Animated Canon, The Many Adventures of Winnie the Pooh is the best-known of the studio's various Winnie-the-Pooh adaptations.

First released in 1977, it's essentially a Compilation Movie incorporating three short featurettes about A.A. Milne's title character, each of which had previously been released individually:

A fourth short, Winnie the Pooh and a Day for Eeyore, was released later in 1983 and became the stock bonus feature for this movie on home video releases (it and the other three shorts have also been released together in the Walt Disney Mini Classics video series as well as under the Winnie the Pooh's Storybook Classics banner). Some airings of the original film on the Disney Channel in the early '90s oddly used the Day for Eeyore short as the third act in place of Tigger Too, which as a result cut out most of the film's framing animation as well, including the ending.

Many of Disney's later Pooh adaptations (a couple of TV series, some DTV or Disneytoon sequel movies, and an actual canonical sequel) have gotten flak for not being faithful to the original book series. This movie, however, is very faithful apart from the inclusion of a Canon Foreigner.

For the newer 2011 feature (which is the last hand-drawn animated film from Walt Disney Animation Studios before switching entirely to CGI), see Winnie the Pooh (2011).

The Many Adventures of Winnie the Pooh provides examples of:

The bonus short A Day For Eeyore (1983) provides examples of:

Narrator: And so we've come to the end of the article, where Christopher Robin and Pooh have come to the Enchanted Place, and we say goodbye.
Pooh: Goodbye? Oh no, please, can't we go back to page one and do it all over again?
Narrator: Sorry, Pooh, but all stories have an ending, you know.
Pooh: Oh, bother.
Feedback