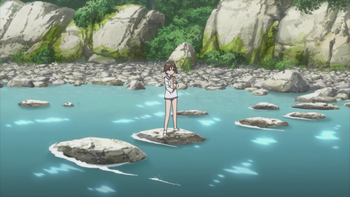 "Crossing here shouldn't be that bad." 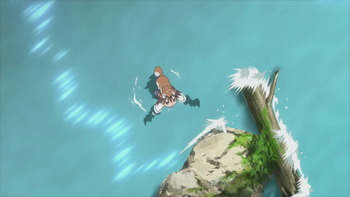 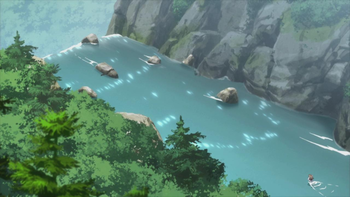 "... Uh-oh."
Pacha: Uh-oh.
Kuzco: [facing the other way, deadpan] Don't tell me. We're about to go over a huge waterfall.
Pacha: [also deadpan] Yep.
Kuzco: Sharp rocks at the bottom?
Pacha: Most likely.
Kuzco: [beat] Bring it on.
— The Emperor's New Groove
Advertisement:

Despite the suspense or drama they may invoke, plunges over a waterfall will not always result in significant physical injury to the characters. This is true regardless of the height of the fall, or the shallowness/rockiness of the bottom.

Usually, this is a good way to stop the fact that in a lot of circumstances travel by river is actually one of the best options available.

May have a Cave Behind the Falls. Compare Mega Maelstrom.

Linda and Tulio go over one during a expedition in the Amazon while canoeing in the river.

Linda and Tulio go over one during a expedition in the Amazon while canoeing in the river.