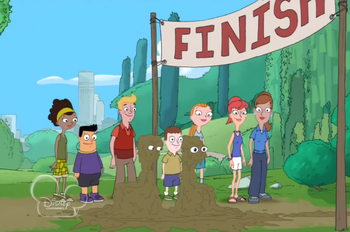 That looks embarrassing.
"He was so crusted with alluvial deposits that one realized how little a mere bath would ever be able to effect. To fit him to take his place once more in polite society, he would certainly have to be sent to the cleaner's. Indeed, it was a moot point whether it wouldn't be simpler just to throw him away."
— P. G. Wodehouse, "The Ordeal of Young Tuppy"
Advertisement:

Face it, we all take some stock in our appearance: at least, enough that we don't want to be all dirty, especially not in front of others. So what's a universal way for someone to be brought down a few notches? Well, by them being muddy, of course! Mud is a particularly dirty substance, hard to wash out.

Occasionally they'll be pushed into mud by someone, or simply fall on their own, which either way is an embarrassing experience. Bonus humiliation points if it's right in their face, or if they fall into a patch of mud that had pigs wallowing in it — this implies that the character is even more lowly than a pig, and, of course, there's a chance they're going to stink afterward. It may be part of a Humiliation Conga.

It can also have practical purposes for temporarily blinding an opponent in battle.

Now, while getting muddy may not be the character's choice, there are times when they'll intentionally cover themselves in mud. It may have a practical purpose such as helping to camouflage them or keep off stinging insects. Or, perhaps, they may be getting extremely dirty in order to help someone else out, in which case they're seen as being more humble and selfless because they put themselves in that position. Sometimes, if the mud is from a character that spends a lot of time outside, such as gardening, it can imply that they're more of a down-to-earth person who spends more time actually doing things than worrying about their appearance.

May be used as Body Paint. Sub-trope of Covered in Gunge — if it's anything other than mud, it goes there. Not to be confused with The Pig-Pen, a character who could be covered in either mud or something equally dirty so often that it's a matter of routine (no special explanation needed for why he's so muddy today), and usually seems content with this situation. The Trope Namer for The Pig-Pen was thoroughly covered in dirt, but even in his case at least it was only dry dirt rather than mud.

While Emma is doing a tightrope over a mud pit, Hazel throws a dodgeball at her, causing Emma to lose her balance and fall face first into the mud.

While Emma is doing a tightrope over a mud pit, Hazel throws a dodgeball at her, causing Emma to lose her balance and fall face first into the mud.