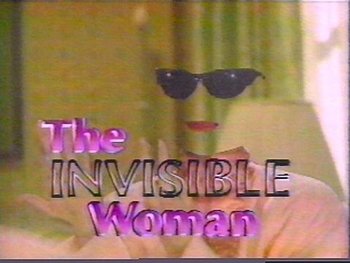 This unsold Pilot Movie, broadcast over NBC in 1983, has the same basic premise as its 1940 namesake. It stars Bob Denver as a chemist whose lab chimp has created an invisibility formula, and Alexa Hamilton as the chemist's niece, Sandy Martinson, a struggling newspaper reporter who becomes an Invisible Streaker after she wipes up the spilled formula in his lab.
Advertisement:

Sandy uses her invisibility to investigate a series of museum robberies, while her uncle seeks an antidote.